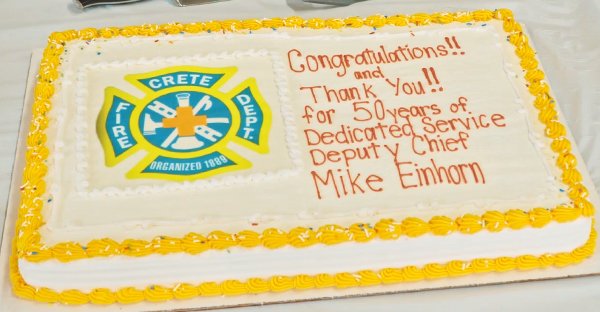 Mayor of Crete and Deputy Fire Chief, Mike Einhorn, celebrated 50 years of service in the fire department on December 5, 2022.

“It sort of just creeps up on you, I guess,” Mr. Einhorn said, while cutting the cake at the open house event at Fire Station 1 the following day.

After graduating from Crete-Monee Highschool in 1968, and earning a degree in industrial management from Purdue University in 1972, Mr. Einhorn joined the Crete Fire Department at the age of 22.

“I had a friend, and his dad was on the fire department. And he got to go up to the fire station, and I always was kind of envious. And I thought, well, there’s one way to get on the inside and that’s join the department.”

In 1976, fire fighter Einhorn went to EMT school, and in 1979, he earned an additional degree in fire science. He was promoted to Lieutenant in 1980.

“It was an intriguing position. Back then we only had 110 calls a year, so if you missed a call, you really missed a call,” Deputy Einhorn said.

Lt. Einhorn was also among the first paramedics to be trained for the department, graduating from Ingalls Hospital, and winning the ‘Silver Stethoscope’, as the second highest achiever.

In 1985, Captain Einhorn was sworn in as Mayor of Crete, taking over for 16-year-incumpent Roland Christopher.

In 1989, mayor Einhorn attended the ribbon-cutting ceremony for the grand opening of the Shell Gas station at 394 and Steger Rd. And, later that year, he married Sheila Fehland.

Crossing into the new millennium, Mr. Einhorn became assistant chief and then deputy chief, and says today that he is far from retirement.

“As long as I’m heathy, and I can transition to the management end of it, which is really what I like to do,” Chief Einhorn said.

“He’s still going, and not slowing down. 50 years and he is still going strong,” Chief Muirhead added.

“I figured out that Chief Einhorn has responded to over 12,000 calls during his 50 years of service,” Captain Boehner said.

At the December 12 village board meeting, Chief Muirhead surprised the mayor by reading an official resolution, recognizing his 50 years of service.

“This is a resolution honoring and thanking Deputy Chief Michael Einhorn. He has served Crete’s Fire Department with pride, integrity, bravery and passion,” part of the resolution read.

After Chief Muirhead finished reading the resolution, Mr. Einhorn received a standing ovation from the entire village board.

“I really appreciate that. This certainly wasn’t expected,” Mr. Einhorn said. “I just try to do what I can to add to the operation. A lot of times I probably put the fire department above other things in life. I appreciate you recognizing it,” he said.

“He’s probably one of the best tactical firemen that I know,” Chief Muirhead said. “If you want to talk tactics, he’s the man to talk to. He knows how to put a fire out and he has influenced a lot of people with his tactics and how he does things.”

“Chief Einhorn spends a great deal of time making sure that our training program is sufficient and he is very much aware of the needs of the fire service,” Captain Jim Boehner said. “He has seen a lot of changes and he is still extremely active, and very few people can reach that milestone.”

“I’m most proud of the department that I’m on,” Deputy Chief Einhorn said. “A lot of guys got trained going through here, and I think that I was a part of that, at least I think I was, and I think that’s a big thing.”