Two new Crete Police Officers were sworn in at the Village board meeting on Monday evening.

John Iannucci and Nevin Lennett are the newest members of the Crete Police Department.

“This brings us to full staff of 21, for the first time in 5 years or longer,” Crete Police Chief Scott Pieritz said.

Officers Iannucci and Lennett are scheduled to start 14 weeks of training at the Macon County Law Enforcement Training Center on August 14. Three other Crete officers are currently attending police academy – one set to graduate about two weeks from now, the other two later next month.

“Once all of them graduate, they will enter a 12-week field training program at Crete PD. We won’t have them all fully trained and on street until March 2023,” Chief Pieritz said.

At that point, the total number of patrol officers will be 15, including detectives and school resource officers, four Sergeants, one Deputy Chief and one Chief.

The 2022 National Night Out Policing Community event is tonight, between 5 and 7:30 pm, at Monee Reservoir. Bring the whole family and join us for community fun, with lots of activities and great food. Here’s the video from last year’s event:

The Crete Village Hall was packed with people at the board meeting on Monday night, as 52-year-old James Muirhead was administered the oath of office by Village Clerk Deborah Bachert, becoming the new fire chief of Crete.

The position of Crete Fire Chief became available when former Chief Michael Waterman retired in early April of this year.

Chief Muirhead started his career 33 years ago, as a paid-on-call firefighter for Matteson Fire Department. In 1993 he moved to Crete and the Crete Township Fire Protection District, where he spent eleven years and attained the rank of lieutenant. He also worked at Riverdale Fire Department, serving as their deputy chief for three years. 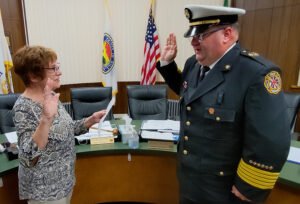 “I’ve known JP for a long time. He’s a quality guy and I have very high hopes and expectations that he will do a very good job for the village,” Crete Mayor Michael Einhorn said.

I’m super excited. I’ve known the Crete guys for years, growing up in Crete and being a previous member of the Crete Township Fire Department. I’m looking forward to working with them. The biggest thing I’m hoping to do is to keep things safe, because that is the utmost importance,” Crete Fire Chief James Muirhead said on Monday.

The Village of Crete wishes everyone a safe and happy Independence Day.

Village Hall is closed today and will reopen again tomorrow.

The Mayors of Crete and Village of University Park are asking residents to be courteous and respectful to their neighbors during the upcoming holiday celebrations.

Dogs, cats and other pets are also affected by the loud noises from fireworks, because of their extraordinary hearing, which is at least four times more sensitive than human ears. For the communities in general, there’s also risk of damage to people and property associated with projectile fireworks.

“What goes up, must come down. And when it comes down, it can cause damage,” Mayor Einhorn said.

The annual ‘Paint the Parking Lot’ event is this Wednesday, June 29, 10 am – noon, at Crete Public Library.

Bring the kids to help decorate 25,000 sq. ft. of prime parking lot blacktop with your artwork – paint is supplied by Crete Library.

The Crete Police Department now has its very own Facebook page – facebook.com/CretePD

Launched June 23rd, the page is part of the community policing initiative by the Crete Police Department, to promote new events, programs, and community outreach, according to Crete Police Chief Scott Pieritz.

From Crete to Beecher to Monee – the 2022 Special Olympics Law Enforcement Torch Run was successfully completed today, despite heatwave temperatures, thanks to the extraordinary resilience of police officers, athletes, their families and staff from Crete-Monee Special Athletics.

Big thank you to Crete Police Department for the strong showing of support, Crete Emergency Management Agency for assisting with traffic, Crete-Monee Special Athletics, Michelle Calderone and the athletes for being super awesome, and to everyone who came out to support the runners as they raise funds for Special Olympics.

Across the pond from Culver’s, and next to Taco Bell, construction is underway to bring Mermaids, Italian vernacular and caramelized aromas to Crete.

Starbucks in Crete is scheduled to open later this year. To be located at 23230 Volbrecht Road, the building plans showcase spacious parking, a drive thru and a 2,225 SF main building – larger than most other locations, averaging between 1,500 and 2,000 SF.

Crete Administrator Mike Smith was instrumental in getting the business to town – he says the presence of Starbucks will hopefully attract more growth in the area.